Lately I have been working on an implementation of monotone smoothing splines, based on [1]. As the title suggests, this technique is based on a univariate cubic B-spline. The form of the spline function used in the paper is as follows: 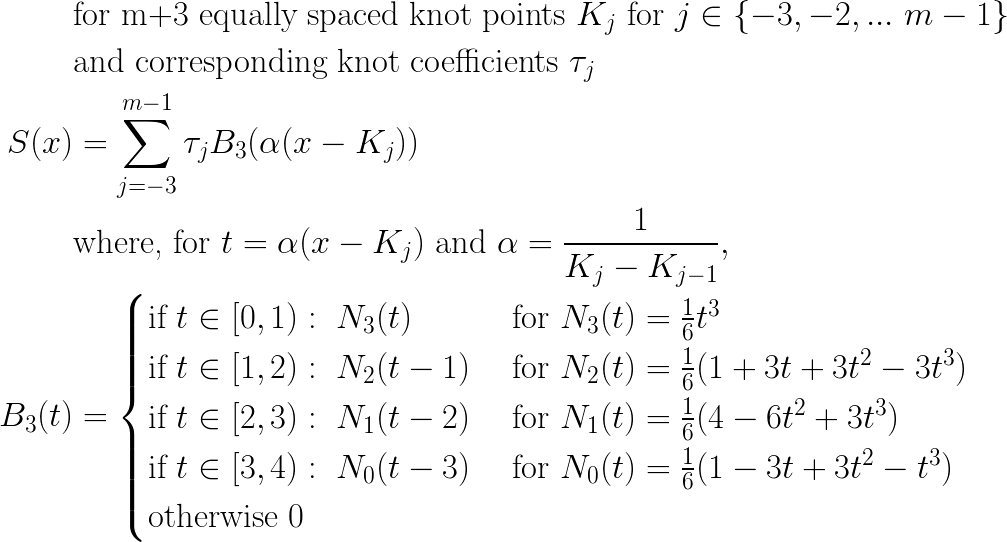 The knot points are all equally spaced by 1/α, and so α normalizes knot intervals to 1. The function and the four are defined in this transformed space, t, of unit-separated knots.

I’m interested in providing an interpolated splines using the Apache Commons Math API, in particular the PolynomialSplineFunction class. In principle the above is clearly such a polynomial, but there are a few hitches.

Consider the arguments to , for two adjacent knots and , where is greatest knot point that is <= x. Recalling that knot points are all equally spaced by 1/α, we have the following relationship in the transformed space t:

We can apply this same manipulation to show that the arguments to , as centered around knot , are simply .

By the definition of above, you can see that is non-zero only for t in , and so the four corresponding knot points contribute to its value:

This suggests a way to manipulate the equations into a standard form. In the transformed space t, the four nonzero terms are:

and by plugging in the appropriate for each term, we arrive at:

Now, PolynomialSplineFunction is going to automatically identify the appropriate and subtract it, and so I can define that transform as , which gives:

I substitute the argument (αu) into the definitions of the four to obtain: 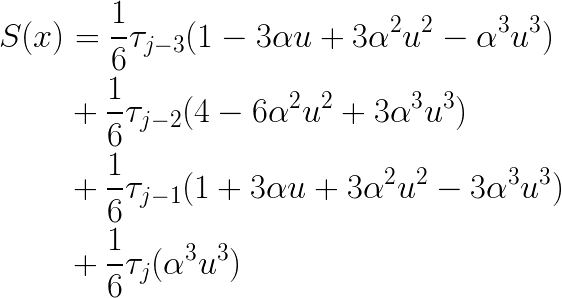 Now I am equipped to return a PolynomialSplineFunction to my users, which implements the cubic B-spline that I fit to their data. Happy computing!